So…I promised to show you how I got on with the full-sized toile for the Ladies’ Street Jacket from the National Garment Cutter Book of Diagrams.

In January I made a tiny toile as a test-run which was really helpful but I’m really glad I made a full-sized toile to get a sense of how the garment fits and hangs.

I learned a lot from making this.

THE FIRST THING I learned is that the pattern wasn’t as hard to draft as I expected.  Once you started with a right-angle at the ‘A’ point on each pattern piece – usually found in the top right corner – all you have to do is follow the measurements down the sides of the pattern and measure everything in relation to the A point. 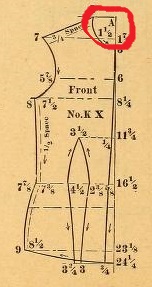 ‘A’ point on the front pattern piece

Once you have the basic pattern drawn out, it’s time to start adjusting.

I have a long torso.  Like a dog, I am taller when sitting down, so I added 3 inches to the waist length all around (so on the front pattern piece above, the 16 ½ measurement is moved to 19½ and then the shaping is put in as usual.  I don’t know if that’s the right thing to do but it seemed to work).

Width-wise, I was lucky in that the pattern seemed to be made for a 34”(ish) chest so I planned to take slightly deeper tucks in the back panel than the pattern suggested to bring it a little closer to my size.

So I cut everything out. 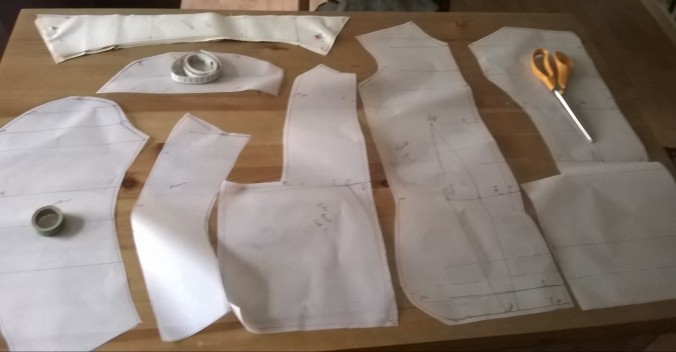 All the pattern pieces (except the collar. Because there was no pattern for that. Scunners.)

And then cut the pieces out of scrap canvas.  And then I basted.  And basted.

And tried it on.

That’s when I learned THE SECOND THING.

The second thing I learned is that Victorian ladies had tiny arms.  Like T-Rex tiny.

Either that or I have arms like a spider-monkey.

Maybe it’s a bit of both.

So the sleeves had to be adjusted.

The shoulder was a joke…it just slumped off the sides like a bad cat.

So back to the drawing board and the cutting table.

And I consulted with the hallowed oracle….Vogue’s book of Smart Dressmaking from 1936.

The book is brilliant – it has everything an amateur like me needs, including very prim advice about ‘developed’ figures.

I’m sure the author didn’t mean ‘developed’ in the sense of ‘more highly evolved’ but that’s what I’m taking it as.  I have much more developed arms than the Victorian lady who wore this jacket.

And cut the sleeves vertically to add width.

I re-cut, re-basted and did a second fit on the left-hand side of the jacket.  I wanted to leave the right side as it was at the first fit so I could compare and if worse came to worst, go back a few steps.

I shortened the shoulder line and deepened the armscye by taking an inch off the arm-hole edge on the front and back pieces.  I also shorted the top of the side-back piece by an inch but kept the original shape as much as possible.

The shorter shoulder sits much more naturally and the extra width in the sleeve makes a huge difference to the way the sleeve sits overall.

However, because the shoulder is shorter, the sleeves sit higher and they are even shorter than I thought they were.  Even after I added 3 inches to the sleeve length they are still ridiculously short so the next version (the final version) will have to add at least another 4 inches to the lower part of the sleeve and the wrist section.  I won’t do another series of horizontal cuts because I think the elbow is sitting pretty close to where I want it.

I also added the rever on the left side and made a collar (the pattern somehow neglected to include a collar so I had to draft one…basically a long rectangle) to see how they sat.

I’ve shaped the bottom hem of the jacket a little more than the original pattern so that it follows the line of the rever and curves up and around to meet the flare at the back.  It’s a strange shape but I like it.

The next stage is to get some fabric for the finished thing.[1]  And make hard decisions about colour and trimmings.  I think this jacket could very easily go too pirate.  Much as I love the weird medallions in the original pattern I’m not sure I want to stick eighteen doubloons to myself.   Does it need piping?  Maybe some embroidery?  Contrasting or complimentary lining? Do I want to go full-on steampunk?  These decisions are harder than basting.  I’ll be going back to Ripper Street and the V&A catalogue for some inspiration.

2 thoughts on “Making a Victorian Jacket: a full size toile and a lesson in sleeves…”