Everyone’s gone Alice mad! It’s been 150 years since Lewis Carroll’s Alice’s Adventures in Wonderland was first published.  And on Saturday July 4th it’s Alice’s Day in Oxford. In honour of this frabjous occasion I’m doing a series of posts about all things Alice…

“No, no! The adventures first,” said the Gryphon in an impatient tone: “explanations take such a dreadful time.”

I’ll take the Gryphon’s advice and do the adventures first….

I’ve been on research leave for a term. It’s been great. And terrible.  There have been days of mighty exploration in archives (including The Royal Commission for the Great Exhibition, The Pollard Collection at TCD, and the newly-opened and gorgeous Weston Library at the Bodleian).  There have been days of frenzied writing.  And days of frenzied reading. And days of gnawing my knuckles and staring at a pile of notes like a demented Jonathan Strange.

But all work and no play makes for a Jane a dull girl and so I arranged a day-trip went with fellow children’s literature scholar and wild Irish girl Beth Rodgers to the V&A Museum of childhood.  We are nerds – even on our days off we can think of nothing nicer than visiting a museum.

Adventures!  Vitamin D! The swealterish air of the London Underground system! And the glory of the V&A Museum of Childhood!  Look how happy we are to be outside!

There were two exhibition on – Small Stories: At Home in a Doll’s House about *shudder* doll’s houses and The Alice Look all about the ways Alice has been costumed over the years.  While I was very sad to see that nobody had linked up the two exhibitions by making a giant doll’s house that I could sit inside while pretending to BE Alice, I was quite impressed.

Although I am creeped out by doll’s and doll’s houses (miniature things make me feel dizzy) I have to admit that Small Stories is an excellent exhibition. The V&A have and enormous collection of doll’s houses and a collection of enormous doll’s houses…the image below gives you a sense of a scale of some of the pieces:

The exhibit is arranged in roughly chronological order, showing the development of fashions in doll’s houses and fashions in interior decoration from the 18th century to the 21st century.

a room with a snazzy rug…

Each case is accompanied by audio pieces (which you can hear here) telling stories about the dolls and the houses.  Some of the dolls were a bit scary though and we didn’t much want to imagine that they were real people with voices…

Phineas has murder in his little heart

We were especially thrilled to discover that by positioning ourselves just so we could see our giddy faces reflected in the mirrors of the doll’s houses.

It’s me! And some creepy dolls…

This lead to falling around laughing like idiots. Thankfully, the staff at the V&A were patient, no doubt being used to seeing escaped academics on a semi-regular basis.

After refreshing ourselves with tea, it was on to The Alice Look.

This exhibit, curated by Kiera Vaclavik of Queen Mary University of London explores the different ways Alice has been costumed in print and media versions of Alice’s Adventures in Wonderland since it was first published 150 years ago.

A selection of Alice publications…

A selection of Alice publications

Alice in white with ribbon instead of hair band

An esperanto Alice with dark hair

A swahili Alice talks to the Dodo

Perhaps the version of Alice we’e most familiar with is the one popularised by the 1951 Walt Disney film.  Alice’s blue dress and hairband (growing up in Ireland we always called these kinds of hairbands ‘Alice bands’) seem absolutely iconic.

But, as The Alice Look shows, Alice has had many ‘iconic’ looks and she continually adapts to new styles and trends. Even between her first public appearance in 1865 and 1871 her costume has changed to reflect changing fashions: 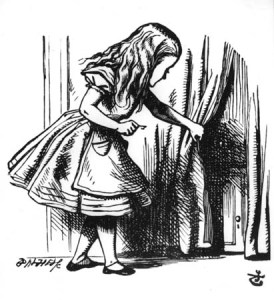 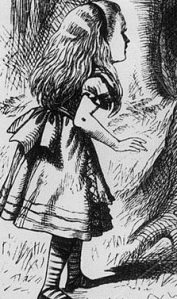 Through the Looking Glass

If you look closely, you can see that Alice’s stockings and apron have changed. Alice doesn’t have a hairband in the 1865 image but has acquired one by 1871. There are small changes to the sleeves of her dress, the width of the skirt and the way the apron is tied too.

It’s a real delight to see the changes in her costume through the years and in different translations of the text – the blond, blue-eyed Alice might be the most common in English-language versions of the text but she is by no means the only Alice available to readers today.

For me, the best part of the exhibit was looking at the dresses on display:

More than anything, these show how the “Alice look”, like Carroll’s book, is malleable and adaptable and open to our own interpretation.

You could even design your own Alice look and add it to the display.  Though some visitors had an incredibly avant-garde approach to fashion:

If you’re keen to have your only little adventure to London, I can’t recommend the V&A Museum of Childhood enough. It’s free, there’s tons to see, and it’s very easy to get to.

The Small Stories exhibition is on until September 6th 2015 and The Alice Look runs until November 1st 2015.

More from me about Alice tomorrow…

[1] Discovering how stupid Past-Jane can be is a major part of the process. I once wasted about two hours frantically searching for the source of a particularly brilliant quote only to realise that it was, in fact, my own writing. 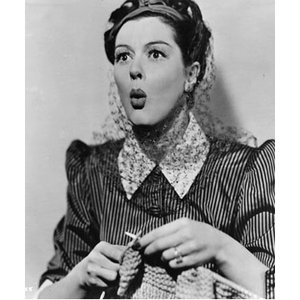