There’s a celebratory Google Doodle and everything. 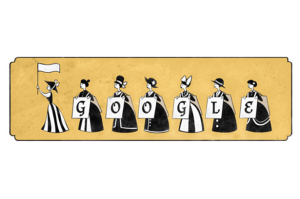 I thought I would join in the fun by sharing some clips from lively but short-lived t.v. show “Up The Women”

Just look at those lovely shirt-waists!  The show is about Margaret’s attempts to transform The Banbury Intricate Craft Circle into a new (sort of) political group ‘Banbury Intricate Craft Circle Politely Request Women’s Suffrage’.    Most of the other members aren’t too sure what suffrage is or why they might want it but if there’s cake and fancy rosettes, they’ll give anything a shot. The best episode (of the three) was when Emmeline Pankhurst shows up and she’s not quite what anyone expected…

We love Vikings.  We love their literature, their art, their stories and legends.  We love that they came and settled in our part of Ireland (Fingal means ‘blond strangers’ and lots of the town names have echoes of Old Norse and Icelandic in them).  So when Vikings became a TV thing, we loved that too.  Naturally, my heart went out to Floki, the poetic and demented ship-builder.  But Karl was all for Ragnar.  Because Ragnar kicks ass.  And, before he kicks ass, he wraps himself up in a snuggly blanket and thinks about just how much he wants to kick ass.

Once Karl saw the blanket, he knew he had to have one.  And I knew I had to knit it.

Sadly, we never get another good look at Ragnar’s blanket.  By squinting at my screen I deduced that it had textured bits and cabled bits.  I drew up a sort of pattern that included a couple of small cables and a big central cable. 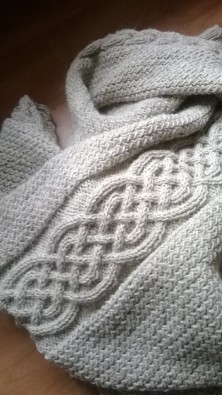 Then I went searching for some authenticish Viking-type yarn.  I wasn’t about to fork out for Lopi for something as big as the blanket (4 foot by 6 foot if you please) so I went looking for undyed yarns.  I found this undyed Jacob’s yarn.  It’s scratchy and full of VM and weird bits that I’m pretty sure came from other sheep that the Jacob attacked and murdered.  It stinks of sheep.  But it’s a great colour. And there’s half a kilometer of yarn in each cone.  My blanket used nearly two kilometers of yarn.

Charts One and Three are worked over 8 rows and so will be repeated twice for every one repeat of the central cable pattern.

The central cable pattern I used is modified from the wonderful Viking Bag pattern on Ravelry.  There are many examples of this woven cable but this is by far the best example. The designer, Karen, kindly put the pattern up online for free here.  I used the big cable from the bag (28 stitches) and then added a purl stitch either side to make an even 30 to allow for a little more space between the cable and the slip-stitch pattern panels.  You could use any large cable pattern that you fancy though – just remember to adjust the total number of stitches if you do!

Work one row, knitting the knits and purling the purls and turn work ready to begin charts.

Work Chart One over first 13 stitches

Work Slip-Stitch Block one:  *Slip one, Knit One, YO, PSSO* repeat to next marker

Work Slip-Stitch Block Two: *Slip one, Knit One, YO, PSSO* repeat to next marker

Now, it’s a matter of working these 16 rows until you run out of yarn or patience or both.

Finally, work your rune-chart.   Runes are important.  The Old Norse speakers of Medieval Iceland and Scandinavia loved marking things with runes.    Including insult-poles or níðstöng.   Obviously, when Winters last for months and months, tensions can build up. Rather than go and murder your neighbour straight away, it’s best to egg him into attacking you by making a níðstöng and setting it up in his front garden. I think of this as medieval equivalent of ringing someone’s bell and then hiding in the bushes giggling when the answer the door.[1]  Other uses of runes include graffiti, commemorative stones and generally telling people who owns what.[2]

For me, it’s not enough to write something in modern English using runes – that’s just silly – so I called in the troops (Thanks, Kyle) and got this: Jóna gerði þessa fyrir Karli inni Kráku or“Jane made this for Karl the Crow”.

Each of my runes was 10 stitches high and between 1 and 8 stitches wide.  I made a pattern on some graph paper. I just managed to squeeze all the characters I wanted into the 196 stitches on a row.  I’m not mad on the result as it is a little…subtle.  I will stitch over the runes in red.

Here are the rune-staves from the Furthark – my attempts at charting them are below!

Edit: here are the Futhark Charts as promised!

[1] I know that I shouldn’t think of Vikings as a bunch of bold children but I can’t help it. I found out they wore mittens.  I can’t shake the image of then dangling on strings out the bottom of their sleeves.  I bet their mothers made them bring hankies when they went raiding and everything.

[2] I bet their mammies wrote their names on the inside of their jackets too.